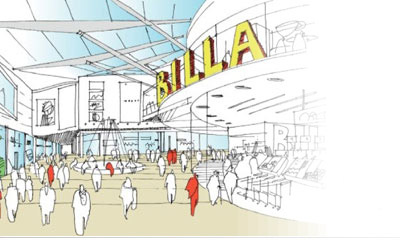 A fund of the Meyer Bergman Group, London owns an existing shopping mall located directly on a main street in Kiev. The mall is surrounded by residential buildings and a subway station as well as a central bus station is in the immediate vicinity. It is planned to nearly double the retail space by rounding off the plot and at the same time/ while simultaneously relocating an existing supermarket. Crisis management became necessary in 2008 as some tenants were not able to pay the full rent due to the financial crisis. For three months GC had been assisting in negotiations with tenants until the rent roll was stabilized.

Advising the client of the main project goals
Complementing the main project team
Contract negotiations with the planning team
Preparing an overall schedule
Development calculations / Feasibility study
Negotiations with the landowner
Clarification of building restrictions
Interface
Standard project management work will be implemented for the next phases.
Projekt-Porfolio (PDF)