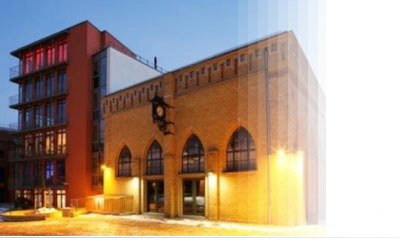 The project entailed the development of an approximately 50,000 m² complex at the foot of the hill after which the Kreuzberg area of Berlin is named. The former brewery was to become a new center city residential district with loft apartments, retail space, an underground parking garage with 650 parking spaces and an underground museum according to the plans of the American architect Fredrick Fisher.

For the gallery, the National Museum for Modern Art, Photography and Architecture, new space was to be constructed in the center of the complex in the historically protected existing structures, including the former brewery basement.

The existing buildings were renovated into lofts with additional storeys added in some cases. The new construction of townhouses and apartment buildings was also executed in a loft style. Parts of the existing structures were used to create a leisure area including spa, restaurants and event areas.

The services provided focused on: